The Precambrian supereon comprises the materials and processes that have occurred from the formation of the Earth to the biological diversification that gives way to the Phanerozoic, the Cambrian explosion (541 ma).

The Precambrian is divided into three eons:

The name Aeon Hadic derives from Hades, guardian of the underworld in Greek mythology. During this time, since the Earth originated, the bombardment of meteorites was continuous, in such a way that its surface did not cool until 3900 my and the formation of the solid crust could begin.

In the Hadic, the Moon was also formed, it is believed that by a collision between the Earth and a protoplanet the size of Mars.

No Hadic rocks have been found. In lunar rocks and meteorites it has been possible to find rocks of ages close to 4500 ma, but on Earth, due to plate tectonics and erosion, there are no rocks older than 3800 my The oldest remains found are zircons of 4100 ma, which would be the oldest minerals on Earth.

The atmosphere in the Hadic was not like it is today. It lacked oxygen and was made up of gases such as hydrogen, methane , ammonia, CO2, etc.

The main events that took place in the Hádico were:

By Tim Bertelink (Own work) [CC BY-SA 4.0], via Wikimedia Commons

The Archaic Aeon, formerly known as the Archaeozoic, began 3,800 my ago, the age of the oldest sedimentary rocks known to show that there was biological activity. They are rocks of marine origin, so they are the first evidence of a hydrosphere on Earth.

By Tim Bertelink (Own work) [CC BY-SA 4.0], via Wikimedia Commons

The Proterozic Aeon began when free oxygen in the atmosphere increased and its composition changed, favoring the appearance of eukaryotic cells and multicellular beings.

The main events that occurred in the Archaic and Proterozoic are:

Life in the Precambrian

The first living beings to appear were anaerobic prokaryotes, of which there is evidence of their existence from about 3,500 my ago. These prokaryotes were heterotrophic, and they fed on organic molecules from archaic seas.

When organic molecules began to be scarce, the first photosynthetic autotrophic prokaryotes, cyanobacteria, emerged 2000 my ago, which due to their photosynthetic activity, reduced the amount of CO2 and increased the amount of O2 existing in the atmosphere. During the Proterozoic, colonies of bacteria formed rocks called stromatolites.

The appearance of oxygen in the atmosphere caused the first aerobic respiration organisms to appear.

Then, about 1500 my ago, the first eukaryotic cells appeared, and at the end of the Proterozoic, the first multicellular organisms. They were flat-bodied organisms, such as sponges, coelenterates, etc., which left few fossils. The few fossils that have been found are known as the Ediacara fauna, to be discovered in this Australian locality.

The Ediacara fauna represents the first great explosion of life on Earth, made up of marine invertebrates that became extinct at the end of the Proterozoic. 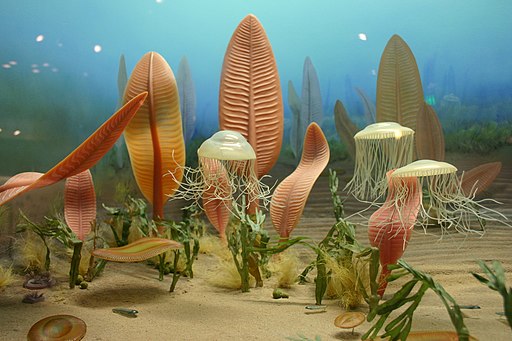 By Ryan Somma (Life in the Ediacaran SeaUploaded by FunkMonk) [CC BY-SA 2.0], via Wikimedia Commons